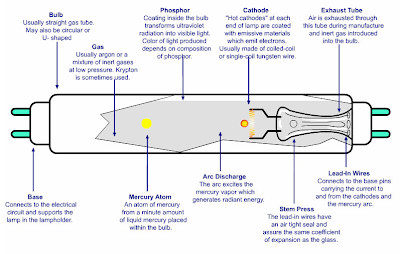 Fluorescent lamps are commonly used every where. These lamps are more energy efficient than ordinary incandescent light bulbs.

They operate at a very low gas pressure.Light is produced by them when an electric current passes between two electrodes called cathodes in a tube filled with low-pressure mercury vapor. It also contains inert gases such as argon and krypton. The electric current passes through the electrodes
it excites the mercury vapor in the tube, generating radiant energy, primarily in the ultraviolet (UV) range. The tube consists of phosphor coating on the inside. When the UV radiated by the mercury vapor falls on the phosphor coating, it is converted into visible light. Changing the composition of the phosphor powder inside fluorescent tubes changes the spectrum of light produced. Mercury is present in the lamp in both the phosphor powder and in the
vapor.

Ballast is a device used in the fluorescent lamps to provide and control the voltage in the lamp, and stabilize the current in the circuit. Fluorescent lamps are more energy efficient and have a longer lamp life than incandescent light bulbs of an equivalent brightness because more of the energy input is converted to usable light and less is converted to heat.