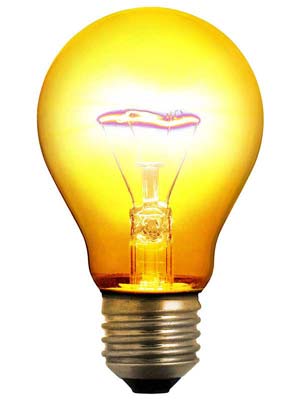 In an incandescent light bulb, light is produced by the heating of filament. It has a carbon-based filament in the center of the bulb connected to the two terminals and maintained at vacuum glass chamber. This filament has a high resistance to electric current. END_OF_DOCUMENT_TOKEN_TO_BE_REPLACED

Continue ReadingHow Does an incandescent Bulb Work?
CFL’s are a type of fluorescent lamps. Light is produced by
them when an electric current passes between two electrodes called cathodes in
a tube filled with low-pressure mercury vapor. It also contains inert gases
such as argon and krypton. The electric current passes through the electrodes
it excites the mercury vapor in the tube, generating radiant energy, primarily
in the ultraviolet (UV) range. The tube consists of phosphor coating on the
inside. When the UV radiated by the mercury vapor falls on the phosphor
coating, it is converted into visible light. Changing the composition of the
phosphor powder inside fluorescent tubes changes the spectrum of light
produced. Mercury is present in the lamp in both the phosphor powder and in the vapor. Whereas in incandescent lights, a filament is heated in a vacuum until it glows and gives off light and heat. During this process an enormous amount of
energy is wasted as heat.

END_OF_DOCUMENT_TOKEN_TO_BE_REPLACED

Continue ReadingHow do CFL’s work / How are they different from Incandescent Lights?
The generator is a device which converts the mechanical energy into electrical energy.